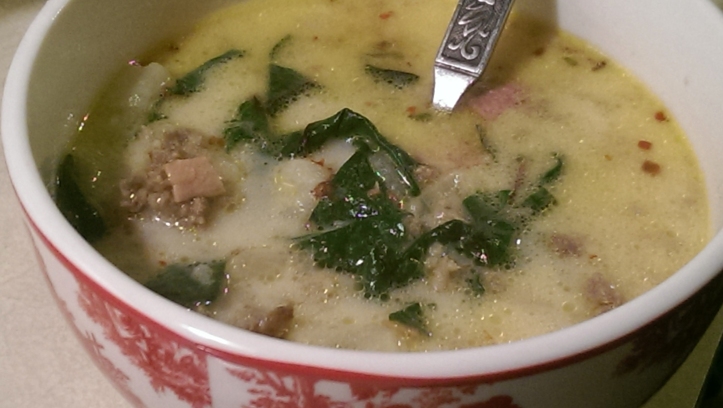 Simple, fresh farm ingredients along with some spicy sausage and dairy creates this tasty Tuscan-style soup popular at some Italian restaurants.

Popularized through the Olive Garden restaurant chain, this zuppa toscana has no authoritative recipe but is rather “in the Tuscan style.” Characteristic of Tuscany, the food is more rustic, farm-to-table fare featuring root vegetables, beans and basic meats rather than more refined ingredients such as pasta. The recipe also affords an opportunity for a lesson in substitutions, with a shared basket provided of random herbs and produce from a local co-op subscription.

This dish is basically a sausage and potato soup with greens with the heat and spice level perfectly adaptable to personal preference. Yukon gold potatoes would be the best choice given their creamier nature when cooked but plain russets were used as available. Likewise, most any bitter greens can be used here—kale is traditional in most versions—but Swiss or red chard (Beta vulgaris vulgaris) works equally as well and provides a small touch of added color.

Many cream soups can use a number of dairy products with little difference, whether whole milk, cream or some blend thereof. Whole cream tends to be too heavy for many tastes and skim milk too thin to adequately add any body, so half-and-half is often a good compromise. Canned evaporated milk (not sweetened) was used in this version as it is universally convenient and provided the fat and flavor necessary for an improved texture.

Most versions of this often-copied recipe include little or no separate spice additions, even salt and black pepper, as the sausage and bacon are sufficiently spiced for the dish. But provided with sprigs of fresh rosemary and thyme, their flavors easily and delicately infuse the soup without the strength of the dried herbs.

This soup is hearty enough to be an entrée unto itself. Serve with some crusty toasted bread, and top with a sprinkle of Parmesan.

1 Crumble and sauté the sausage with the red chile flakes until browned and broken apart. Drain the fat and set aside.

2 Finely chop the bacon and onion, and mince the garlic. Sauté in the same pot until the bacon is cooked and the onions are soft, about 10 min.

3 Add the stock, scraping any browned bits from the bottom. Bring to a boil, then reduce the heat to simmer.

4 Peel and slice the potato into medium-thin pieces and add to the stock along with any herb additions. Cover and simmer until cooked, about 30 min.

5 Slice the chard leaves away from the stem, and roughly chop (discard the stems). Add to the soup until just wilted.

6 Stir in the reserved sausage and dairy until heated through, and remove any herb sprigs before serving.