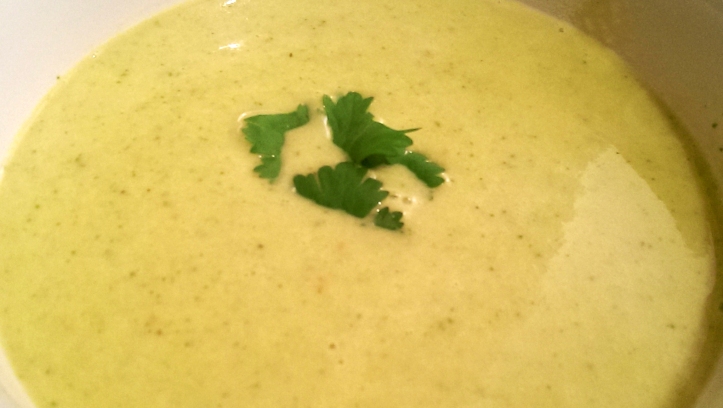 With a moderate sting cooled by mild white cheddar, this cream of jalapeño soup captures the flavor without being overwhelmed by acidic, chile heat.

The humble jalapeño chile (Capsicum annuum) is a culinary and botanical treasure. A native of Mexico where it is sometimes called chile gordo (“fat chile”), jalapeños have been used widely in that nation’s cuisine for centuries as well as that of the Southwestern United States both in its fresh form and as a chipotle, its dried and smoked version. Genetically, the pepper forms its own botanical clade with no close species not directly derived from its own cultivars.

With a relatively mild to moderate heat (less than 20,000 Scoville units), the jalapeño can provide acidity and fresh flavor in a variety of ways from pickled to char-grilled to smoked. It can also serve as a vessel itself, stuffed with cheese and herbs, or battered and deep-fried as a party snack. But the bright fruit flavor it possesses—yes, as a seed pod the chile is technically classified as a fruit—can often be overlooked, and rightly deserves to be in a showcase of its own.

The peppery heat in this dish can be moderated not only with the number of chiles included but by removing the seeds and fleshy white ribs, where much of the capsaicin is held in the plant. A brief sauté can also ease the heat, and the added cheese and dairy soothe the burn without completely eliminating it. Finish the soup with a purée until silky smooth or stop just short to leave a little texture in the dish.

This soup works best served hot in a small bowl as a side to a lunchtime sandwich and salty potato chips.

1 Finely chop the jalapeños, garlic, tomatoes and onion and sauté in the butter until soft, about 5 min. Work in the flour, and season to taste.

2 Gradually add the stock and cilantro, forming a thin roux. Bring to a boil then reduce the heat and simmer, covered, for 30 min.

3 Purée until smooth (or leave chunky, if preferred). Stir in the dairy and grated cheese until melted and well-incorporated.