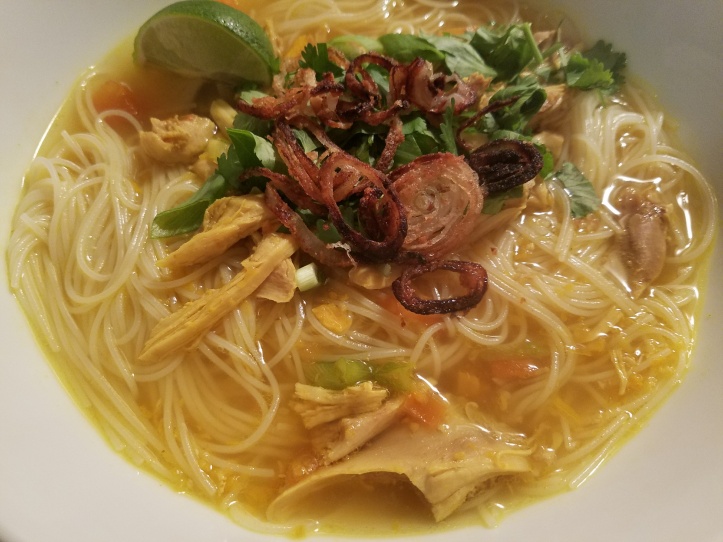 Techniques of building a broth and a flavorful paste are elements that make Soto Ayam a regional comfort food.

The Indonesian term soto refers to a class of brother soups containing a wide variety of meats, vegetables, and noodles or dumplings. Many are named after their town or region of origin, such as soto ambengan, and others after their primary ingredients, such as soto babat (beef tripe) or soto ceker (chicken foot).

Essentially, soto ayam is the cultural equivalent of Western chicken soup for much of Northern Australasia. The broth is a simple infusion of Asian flavors such as ginger and lemongrass; to this, a spiced paste that includes turmeric and coriander is added after a brief fry in oil for a second (and third) layer of flavor. And like many Asian soups, the touches and many garnishes added after cooking often round out the dish.

This soup takes customization well and easily, often with recipes varying from family to family, household to household. Some versions include coconut milk for a creamy broth, or are made from a base of roasted pork bones or ribs. Indeed, the meat can be omitted entirely for a vegetarian version that holds up very well on its own.

The broth can be served over rice noodles, as here, or over light soba noodles or dumplings. Other additions can include crackers, fried tofu, bean sprouts or chile oils, Serve with a sliced boiled egg or a whole boiled quail egg, if available.

1 Add the broth ingredients to 8 c water and bring to a boil. Reduce the heat and simmer, uncovered, for 90 min.

2 Remove the chicken and set aside; shred or roughly chop when cool enough to handle. Strain the broth and discard the remaining solids.

3 Combine the paste ingredients in a food processor and chop until uniform, adding oil as needed to form a roughly emulsified paste.

4 Briefly fry the paste for 5-6 min until no longer raw. Work in all the broth like a roux, bringing it to a boil.

5 Chop the tomato and scallions, and add to the broth. Reduce the heat and simmer, uncovered, for 20 min. Add the cooked chicken, and season to taste.